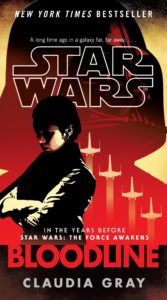 NEW YORK TIMES BESTSELLER • From the author of Star Wars: Lost Stars comes a thrilling novel set in the years before the events of Star Wars: The Force Awakens.

“Unmissable . . . Bloodline’s tense politics, vivid new characters, and perfectly characterized Leia make it feel as central to the Star Wars universe as one of the films.”—Tor.com