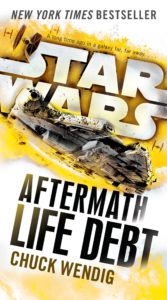 NEW YORK TIMES BESTSELLER • Set between the events of Return of the Jedi and The Force Awakens, the never-before-told story that began with Star Wars: Aftermath continues in this thrilling novel, the second book of Chuck Wendig’s New York Times bestselling trilogy.

Breaking away from their official mission and racing toward Kashyyyk, Norra and her crew prepare for any challenge that stands between them and their missing comrades. But they can’t anticipate the true depth of the danger that awaits them—or the ruthlessness of the enemy drawing them into his crosshairs.