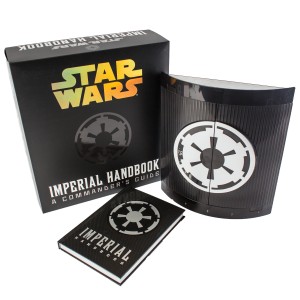 The Empire has taken hold of the galaxy. Soon, with the completion of the Death Star, its control will be absolute. To prepare for the influx of military personnel required to complete this phase of the Emperor s plan, elite Imperial officers have outlined the processes, protocols, and hierarchy each newly-promoted Imperial Commander must carry out to fulfill the Emperor s vision.

Star Wars: Imperial Handbook: A Commander’s Guide is written by top Imperial officers from the Imperial Army, Navy, and Stormtrooper Corps. It provides a comprehensive overview of the Imperial war machine from coordination between the various military branches to Imperial battle tactics, mission reports, and equipment supply chains and its role within the Emperor s long-term plan for galactic domination.

Following the Battle of Endor, this copy of Imperial Handbook fell into the hands of the Rebel Alliance. Through handwritten notes left in margins, leaders for the Rebel Alliance, such as Princess Leia, General Madine, Han Solo, and Luke Skywalker provide a running counter-commentary to the official Imperial propaganda.

Housed in a protective case that opens with lights and sounds, this never-before-seen Imperial Handbook is perfect for Star Wars fans no matter which side of the rebellion they re on.

An Inside Look at the Imperial Military

Imperial Handbook is written in-universe by high-ranking officials within the Imperial Military. Research Stormtrooper specializations such as Incinerator Stormtroopers and Lavatroopers. Memorize the four principles of the Imperial soldier and the Imperial Naval Code. Learn from the best by studying mission reports written by decorated officials. Get access to inside knowledge on the galaxy s greatest threats and cutting edge technology.

In the wake of the Battle of Endor, members of the Rebel Alliance intercepted this top-secret manual. Scribbled in the margins key Alliance members such as Han Solo, Luke Skywalker, Wedge Antilles, and more comment on the Empire’s flawed thinking and analyze why the Empire was doomed to fail.

Imperial Handbook comes with a 160-page book containing all the philosophy and tactical information newly-ascending commanders will need to succeed in the Imperial Military, a Rebel Alliance artifact registration card, a mechanized case with lights and sounds, and a custom-designed Imperial Order of Glory medal.