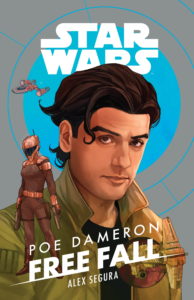 Learn more about the dashing hero from the new Star Wars films! Telling a story hinted at in The Rise of Skywalker….

It’s been a few years since Poe’s mother, who was a pilot for the Rebellion, passed away, and Poe and his father have had more and more trouble connecting. Not sure what he wants to do with his life, teenage Poe runs away from home to find adventure, and to figure out what kind of man he is meant to be.