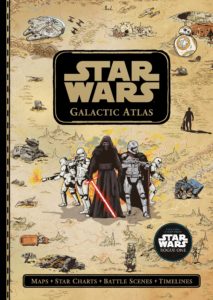 You can explore a galaxy far, far away in this stunning guide to the worlds of Star Wars. It includes a spread introducing Star Wars fans to the planet and characters featured in Rogue One! The Galactic Atlas, illustrated by Tim McDonagh in superb full colour, covers everything from Alderaan and Naboo to Tatooine and Yavin 4, taking in the epic stories, strange creatures and glorious vistas of the entire saga. Taken from the holdings of the Graf Archive and found in the underground Shadow Stacks, these ancient hand drawn maps were unearthed from the Shadow Stacks. The Head Curator’s theory is that they are the work of the great Ithorian artist Gammit Chond. Chond never travelled off-world but he was fascinated by travellers‘ tales, and many of his works depict their stories of adventure and discovery in the rest of the galaxy. While we know that many of the things he has included are a matter of fact, some may merely be tall tales spun by explorers; but all presents a unique view of a fascinating slice of history. The atlas also contains a useful timeline that describes the period of history covered in these maps, from the Clone Wars between the Republic and the Separatists, to the Galactic Civil War between the Empire and the Rebel Alliance, and beyond. The Rogue One spread introduces fans to a whole new terrain.

Set before Star Wars: A New Hope, Rogue One follows a rag-tag group of rebel commandos who must steal the plans to the Empire’s new superweapon, the Death Star. This standalone story transports fans to unseen corners of the Star Wars universe and strange new planets not to mention an encounter with a familiar adversary, Darth Vader. With dozens of maps, star charts, character profiles, and a timeline of the entire saga, this book is the perfect gift for Star Wars fans of all ages.