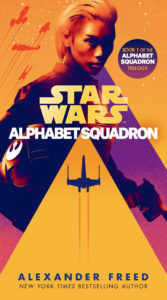 On the verge of victory in a brutal war, five New Republic pilots transform from hunted to hunters in this epic Star Wars adventure. Set after Return of the Jedi, Alphabet Squadron follows a unique team, each flying a different class of starfighter as they struggle to end their war once and for all.

Part of a Marvel and Del Rey crossover event, Alphabet Squadron is the counterpart to Marvel’s TIE Fighter miniseries, which follows the exploits of Shadow Wing as they scheme to thwart the New Republic.