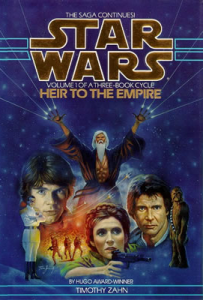 Here is the science fiction publishing event of the year: the exciting continuation of the legendary Star Wars saga. Picking up where the movie trilogy left off, Heir to the Empire reveals the tumultuous events that take place after the most popular series in motion-picture history—masterfully told by Hugo Award-winning author Timothy Zahn.

In spring 1977 a film called Star Wars was released—and a cultural phenomenon was born. Its epic story, about a young man named Luke Skywalker, whose destiny was to save the galaxy from conquest, caught the imaginations of millions and broke all box-office records. Today Star Wars and its sequels, The Empire Strikes Back and Return of the Jedi, are acknowledged as the most popular series in movie history, and rank among the top ten films of all time.

The three Star Wars films form a spectacular saga of bold imaginations and high adventure. But the stories of its characters did not end there. Now for the first time, Lucasfilm Ltd., producer of the Star Wars movies, has authorized the continuation of this beloved story. In an astounding three-book cycle, Timothy Zahn continues the tale of Luke Skywalker, Princess Leia, Han Solo, and the other characters made world famous by Star Wars, as he brilliantly expands upon George Lucas’s stunning vision, „a long time ago in a galaxy far, far away.“

Heir to the Empire begins five years after the end of Return of the Jedi: the Rebel Alliance has destroyed the Death Star, defeated Darth Vader and the Emperor, and driven the remnants of the old Imperial Starfleet back into barely a quarter of the territory that they once controlled. Leia and Han are married and have shouldered heavy burdens in the government of the new Republic. And Luke Skywalker is the first in a hoped-for new line of Jedi Knights.

But thousands of light years away, where a few skirmishes are still taking place, the last of the Emperor’s warlords has taken command of the remains of the Imperial fleet. He has made two vital discoveries that could destroy the fragile new Republic—built with such cost to the Rebel Alliance. The tale that emerges is a towering epic of action, invention, mystery, and spectacle on a galactic scale—in short, a story that is worthy of the name Star Wars.