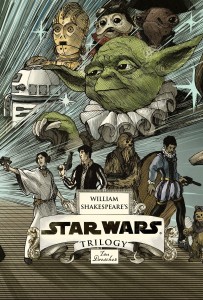 Experience the Star Wars saga reimagined as an Elizabethan drama penned by William Shakespeare himself, complete with authentic meter and verse, and theatrical monologues and dialogue by everyone from Darth Vader to R2D2.

This Royal Imperial Boxed Set includes all three volumes in the original trilogy: Verily, A New Hope; The Empire Striketh Back; and The Jedi Doth Return. Also included is an 8-by-34-inch full-color poster illustrating the complete cast and company of this glorious production.