Star Wars Rebels: The Art of the Animated Series 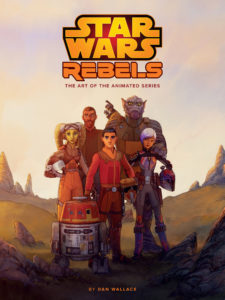 An incredible hardcover amassing art and creator commentary chronicling four seasons of adventure in a galaxy far, far away!

In the early days of the rebellion, a tight-knit group of rebels from various backgrounds banded together against all odds to do their part in the larger mission of defeating the Galactic Empire, sparking hope across the galaxy.

The award-winning team from Lucasfilm Animation brought the beloved occupants of the Ghost into our homes five years ago, now, take a step behind-the-scenes to witness the journey from paper to screen with The Art of Star Wars Rebels. Featuring never-before-seen concept art and process pieces along with exclusive commentary from the creative team behind the show, Dark Horse Books and Lucasfilm proudly present the official look inside one of the galaxy’s most beloved shows.