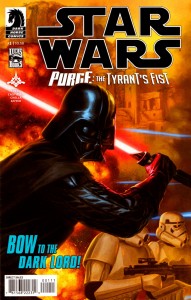 Shortly after the birth of the Empire, Darth Vader master of combat, terror of his enemies, continues his purge of the Jedi Knights on a planet where his Jedi prey are revered. Amidst a planetwide insurgency, the Dark Lord must snuff out one surviving Jedi, as well as kill the fire of rebellion in the native populace. All will bow to the power of Vader and the Galactic Empire!