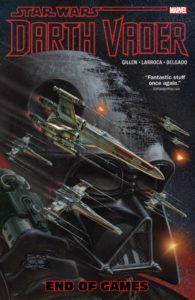 Darth Vader has been secretly pursuing his own agenda, but now it is time for the End of Games. As Inspector Thanoth returns with some startling information, it seems that Vader may have passed his master’s tests. But even after finding favor in the eyes of the Emperor, the Dark Lord’s schemes may yet prove his undoing… Plus, the killer droids Triple-Zero and Beetee wreak havoc in their own homicidal adventure! Marvel’s in-depth exploration of the Dark Side of Star Wars goes from strength to strength!