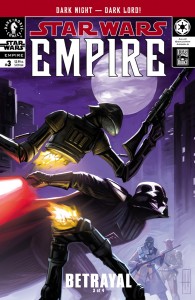 In part three of Betrayal, Darth Vader has landed on a distant world to track down a mysterious Jedi. But, instead of a Jedi Knight, he is confronted by a cadre of bounty hunters who have come to the conclusion that ganging up on — and defeating — the Sith Lord will bring them fame and fortune. Boy, are they in for a wake-up call! Meanwhile, on Coruscant, the ranks of those plotting to kill Emperor Palpatine are thinned as the co-conspirators begin targeting each other.