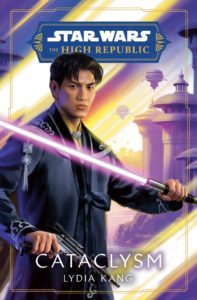 After the thrilling events of The High Republic: Convergence, the Jedi race to confront the Path of the Open Hand and end the Forever War.

After five years of conflict, the planets Eiram and E’ronoh are on the cusp of real peace. But when news breaks of a disaster at the treaty signing on Jedha, violence reignites on the beleaguered worlds. Together, the royal heirs of both planets—Phan-tu Zenn and Xiri A’lbaran—working alongside the Jedi, have uncovered evidence that the conflict is being orchestrated by outside forces, and all signs point to the mysterious Path of the Open Hand, whom the Jedi also suspect of causing the disaster on Jedha.

With time—and answers—in short supply, the Jedi must divide their focus between helping quell the renewed violence on Eiram and E’ronoh and investigating the Path. Among them is Gella Nattai, who turns to the one person she believes can unravel the mystery but the last person she wants to trust: Axel Greylark. The chancellor’s son, imprisoned for his crimes, has always sought to unburden himself of the weight of his family name. Will he reconcile with the Jedi and aid in their quest for justice and peace, or embrace the Path’s promise of true freedom?

As all roads lead to Dalna, Gella and her allies prepare to take on a foe unlike any they’ve ever faced. And it will take all of their trust in the Force, and in one another, to survive.