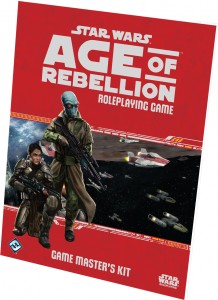 Keep your Star Wars roleplaying campaign focused on the action with the Star Wars®: Age of Rebellion™ Game Master’s Kit. The GM Kit includes a GM screen which will keep all the information you’ll need as Game Master at your fingertips during your Age of Rebellion sessions. You’ll also find new rules for running military squads and squadrons. The GM Kit also includes a complete adventure, Dead in the Water, so you and your players can stand strong against the Empire, even after you’ve finished the adventure featured in the Core Rulebook.