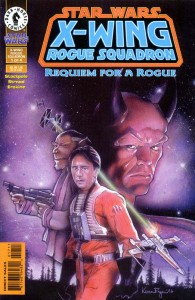 Malrev 4 is an uncivilized planet in a pretty, but otherwise useless, corner of the galaxy. Inhabited by vicious, unthinking brutes, it’s like a living museum of pre-evolution. You wouldn’t bother going there unless you had a death wish . . . or you were a member of Rogue Squadron and you were trying to rescue a downed cruise liner.