Jedi Quest 5: The School of Fear 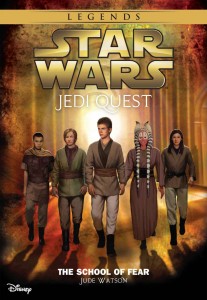 In this fifth volume of the Jedi Quest series, mysterious events are taking place: a Senator’s son has vanished and a secret squad of renegade students exists in the shadows of his elite leadership school. Are these events linked, or is the disappearance the result of the Senator’s political foes pushing the planet toward war? It is up to Anakin Skywalker and his rival, Ferus Olin, to solve the mystery and maintain peace by infiltrating one of the fiercest places in the galaxy: school.