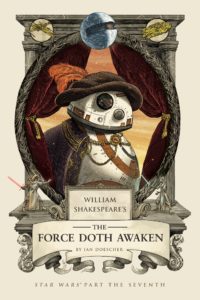 Experience the Star Wars saga reimagined as an Elizabethan drama penned by William Shakespeare himself, complete with authentic meter and verse, and theatrical monologues and dialogue by everyone from Rey to Chewbacca.

As the noble Resistance clashes with the vile First Order, Rey, Finn, Poe Dameron, Kylo Ren, and BB-8 are pulled into a galaxy-wide drama. The romance of Han Solo and Leia Organa takes a tragic turn that Shakespeare would approve of.