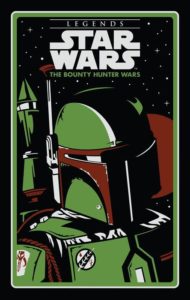 THREE THRILLING NOVELS BY K. W. JETER ABOUT THE BOUNTY HUNTER WARS, A TRILOGY IN THE STAR WARS EXPANDED UNIVERSE

The Mandalorian Armor
In the hope of quelling the Rebellion Prince Xizor proposes a cunning plan to the Emperor and Darth Vader: smash the power of the Bounty Hunter’s Guild by turning its members against each other, and the survivors against the Rebellion. The fiercely independent Boba Fett jumps at the chance to destroy his rivals but when he realizes the game is rigged, he finds himself the target of murderous factions, criminal conspiracies, and the evil at the Empire’s dark heart.

Slave Ship
The once powerful Bounty Hunter’s Guild has been shattered and the posting of an enormous bounty on a renegade Imperial stormtrooper is about to start a frenzy of murderous greed among its warring factions. Boba Fett embarks on his mission to claim the prize unaware that his every move leads him closer to a trap set by the devious Prince Xizor. Fett will die before becoming Xizor’s pawn in the Emperors war against the Rebels—and given the deadly challenge he now faces he may have to.

Hard Merchandise
When Boba Fett stumbles across evidence implicating Prince Xizor in the murder of Luke Skywalker’s aunt and uncle, he makes an enemy of someone who will kill to cover his tracks. Fett also also crosses paths with an amnesiac young woman named Neelah, who may be the key to the mystery—or a dangerous decoy leading him into a murderous ambush. Although Fett hopes to turn Xizor’s hidden enemies against him he knows that his chances for survival are slim—even for someone as skilled and relentless as Boba Fett.