The Bounty Hunter Code: From the Files of Boba Fett (Deluxe Edition) 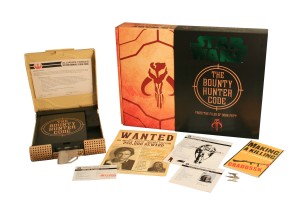 Around the time legendary bounty hunter Boba Fett tumbled into the Great Pit of Carkoon, the Rebel Alliance discovered a secure, blast-proof bounty hunter’s case holding Boba Fett’s personal items. For years it remained hidden away. But now all who wish may unlock the secrets held within . . . .

Press the buttons, insert the data card, and the case opens with sounds and lights. Housed within is a text of great import. At some point in his career Boba Fett bound together the latest edition of the Bounty Hunters Guild Handbook and a manifesto from Death Watch, the secretive splinter group of Mandalorians. Together, these volumes make up The Bounty Hunter Code.

The handbook is an essential guide for all bounty hunters. Senior Guild members offer advice for hunters new to the Guild, a detailed list of the tools and techniques crucial to the “crimson trade,” and the basics of making a living on the margins of galactic law. Boba Fett has scrawled additions and commentary in the margins throughout, as have the bounty hunters Greedo, Bossk, and Dengar, all of whom were once in possession of the Handbook.

The Death Watch volume—part informational guide, part manifesto—is full of Death Watch history, philosophy, and discussions of key Mandalorian gear: their famous T-visors, their celebrated armor, and their impressive jetpacks. This Death Watch booklet was originally taken from Death Watch leader Tor Vizsla and given to Boba by his father, Jango Fett, and features handwritten notes from father to son. Boba in turn intended to leave it to his daughter, and so he’s added his own annotations to aid in her education. The bounty hunter Aurra Sing and the pirate Hondo Ohnaka have added their commentary as well.

From the creators of Book of Sith and The Jedi Path, in collaboration with Lucasfilm, The Bounty Hunter Code reveals the secrets of the hunt and offers insight into this demanding, dangerous, and misunderstood profession.