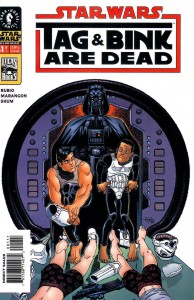 Tag Greenly and Bink Otauna are rebel officers fighting against Emperor Palpatine and his army — until one fateful day, aboard a freighter carrying Princess Leia and the stolen plans for the Death Star, their lives change forever. During an attack on the freighter, Tag and Bink choose life over death, and „borrow“ the armor off a pair of deceased stormtroopers to avoid being killed. Their new disguises get them off the freighter alive and send them off on an adventure neither of them could have predicted! Tag & Bink Are Dead is written by Kevin Rubio (creator of the internet film sensation Troops and the hilarious short stories „A Death Star is Born“ and „Force Fiction“ from Star Wars Tales) and illustrated by the masterful Lucas Marangon.