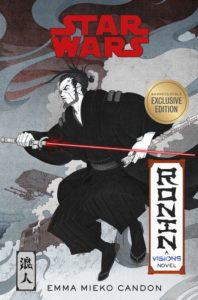 This B&N exclusive edition includes a double-sided mini-poster featuring concept art of the Ronin Sith and his droid companion B5 on one side, with a special black & white edition of the book cover art on the other.

A mysterious former Sith wanders the galaxy in this stunning Star Wars tale. An original novel inspired by the world of The Duel from the Star Wars Visions animated anthology.