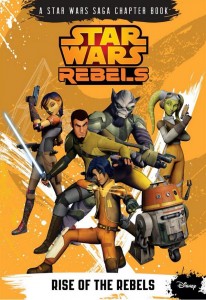 This action-packed chapter book retells an episode of the show. First in a series of four chapter books with full colour illustrations and larger font suitable for a early independent reader. It is an introduction to the Rebels crew – meet Kanan, Hera, and Chopper on the Ghost, Sabine and her colouful and explosive talents, Zeb and his ability to take on Stormtroopers, and Ezra as he proves just what his slingshot and his super-quick instincts are capable of.