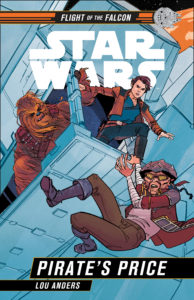 All-new exciting tales about Han Solo and Chewbacca and their adventures in the Millennium Falcon— along with the pirate Hondo Ohnaka!

Hello, my friends! It is I, Honda Ohnaka, greatest pirate in the galaxy, hero of the Rebellion, and, if you listen to that Obi-Wan Kenobi guy, a villain too. But what does he know?

I am here to tell you stories of that most amazing ship, the Millennium Falcon, including my very first time onboard and a few occasions when I actually flew the Falcon myself! And I did a great job of it, too, don’t let anyone tell you otherwise!

Oh, there might be a familiar Wookiee in the story. And that Han Solo guy. He has a way of popping up. And some other people you may know. And some you do not.

So hang on tight, because this adventure is traveling at lightspeed and it’s going to be a wild ride!