The High Republic: Mission to Disaster 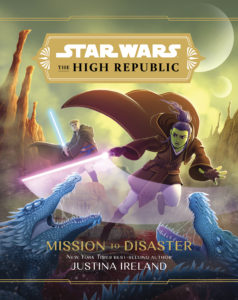 Centuries before the events of Star Wars: The Phantom Menace, in the era of the glorious High Republic, the Jedi are the guardians of peace and justice in the galaxy! The Jedi think the dreaded Nihil marauders have been all but defeated. Their leader is on the run and their numbers have dwindled. Jedi Knight Vernestra Rwoh hopes this means she will finally have time to really train her Padawan, Imri Cantaros—but reports of a Nihil attack on Port Haileap soon dash those hopes. For not only have the Nihil attacked the peaceful outpost, they have abducted Vernestra and Imri’s friend, Avon Starros. The two Jedi set off for Port Haileap, determined to figure out where the Nihil have taken their friend. Meanwhile, Avon must put her smarts and skills to the ultimate test as she fights for survival among the Nihil—and uncovers a sinister plan. Can Vernestra and Imri find their friend before disaster strikes? The New York Times best-selling series continues…. For light and life!