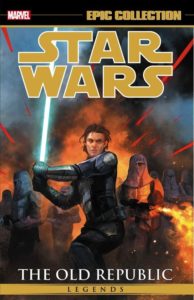 A new direction for fugitive Jedi Zayne Carrick! With his allies by his side – his best friend, Gryph, the mysterious Jarael, and the former Mandalorian warrior Rohlan – Zayne sets forth on seat-of-your-pants adventures fi lled with ghost ships, renegade droids and high-speed racers! A death-defying shoot-out on the face of a comet leads right into the heart of one of the galaxy’s most cruel organizations – the slave-trading Crucible! Zayne risks his life – and maybe his sanity – to help Jarael face her dark past, but the consequences could be deadly for his crew! And, as Zayne Carrick’s saga draws to a close, he’ll face what may be his most dangerous enemy yet – the demonic Demagol!