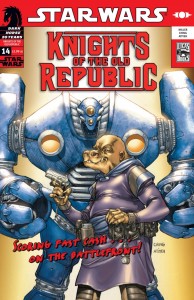 Unexpected twists at every turn as power-mad evildoers hunt our heroes amidst a galaxy spanning war-Knights of the Old Republic is Star Wars at its very best, nearly 4,000 years before Luke Skywalker! A deadly new threat targets Camper, the seriously senile captain of the renegade vessel The Last Resort, and his youthful guardian Jarael must risk everything to try and save him, even if it’s impossible. Meanwhile, fugitive Padawan Zayne Carrick and the conniving Gryph have mistakenly tricked their way into their most dangerous predicament yet-surrounded by an army they are trying to escape on a planet that’s about to become the biggest battlefront in the galaxy. The second someone recognizes them, they’re toast, assuming that a stray blaster bolt doesn’t get them first!