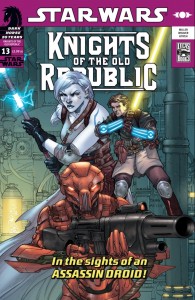 A perfect jumping-on point for new readers, the wildest space adventure in the Old Republic begins a new story arc featuring stolen starships, killer droids, and the debut of a dangerous villain!

When fugitive Padawan Zayne Carrick and his small-time con artist cohort Gryph part ways with their friends on the Last Resort, the odd couple sets out to score a new ship. Soon enough, the two find that helping themselves to something they can’t afford carries a much higher price than they bargained for! Meanwhile, a sinister power from across the galaxy begins hunting the Last Resort, determined to stop at nothing until the ship’s owners are within his grasp!