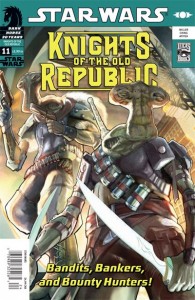 A new two-part story begins as fugitive Padawan Zayne Carrick and the crew of the Last Resort devise a plan to nab some much needed cash. On the banking world of Telerath they set their plot into motion unaware the bounty on their heads is about to catch up to them. Yet there’s more going on than the schemers or their hunters realize, and when it all blows sky-high an unexpected reunion will throw Zayne’s life on the run into question.