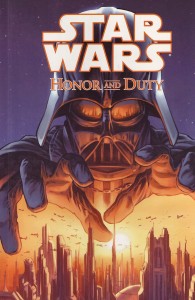 Watch the fall of the Republic through the eyes of Sagoro Autem-Senate Guard, mercenary, prisoner, Clone Wars hero, and Imperial target-in a story that spans from before the Clone Wars to the first mission of Darth Vader!

Young Jedi Knight Obi-Wan Kenobi, and Anakin Skywalker-his even younger Padawan-protect a senator from assassination attempts. Joining the Jedi in their mission is Autem, loyal Senate Guard. Yet, as Obi-Wan and Anakin fend off a league of master assassins, Autem discovers a link between the killers that will change his own life forever-a secret he will not be able to face until the Clone Wars have come and gone, and he finds himself on the run from the new Emperor’s enforcer, Darth Vader!