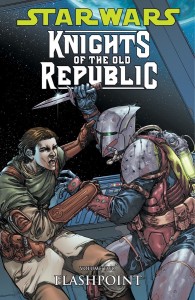 Nearly 4,000 years before the Death Star, fugitive Padawan Zayne Carrick’s quest to clear his name for the alleged murder of his fellow Jedi-in-training brings him head to head with the galaxy’s most feared fighting force-the Mandalorians!

Along with a petty crook named Gryph and Elbee the grouchy droid, Zayne is a passenger aboard the Last Resort, a renegade ship piloted by the senile genius Camper and his fierce protector Jarael. Together, this motley crew will face kidnappings, hijackings, maniacal scientists, Mandalorian traitors, bumbling bounty-hunting brothers, and a few really big explosions.

Collecting issues #7-12 of the ongoing comic book series Star Wars Knights of the Old Republic, this volume launches our lovable heroes into one of the most outrageous and exciting adventures since Luke Skywalker learned the ways of the Force!