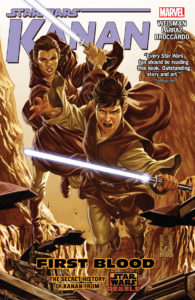 Continue to explore the early days of Kanan Jarrus, the sensational star of Star Wars Rebels! You’ve seen Kanan’s last adventure as a Padawan, now witness his very first! The boy who was Caleb Dume must find his feet as the Clone Wars rage all around him. When the Jedi Temple comes under attack, what can a mere Padawan do to make a difference? Caleb and his new Master Billaba will take command of their own Clone troop, and lead them into the furious Battle of Mygeeto. But lying in wait for them there are a pair of Separatist Generals, one of whom is one of the most deadly threats in the entire galaxy! Can Caleb and Billaba survive Grievous?