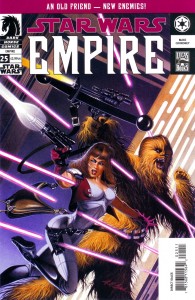 The Beast and the Beauty join forces when Chewbacca teams up with smuggler Sheel Odala to free Han Solo from the clutches of a crime lord in the employ of the Empire. Odala is handy with a blaster, and an old friend. But there are some trust issues. See, she’s the one who betrayed Han to the Empire in the first place… Oh, and did we mention that Vader was on his way?

Star Wars action as you like it; leavened with humor, peril, and passion!