Darth Vader and the Ghost Prison #4 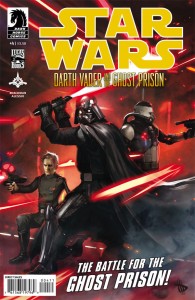 It’s Vader versus the most dangerous inmates the Ghost Prison has to offer, and Cadet Tohm witnesses the Dark Lord at his fiercest—and most merciless.

The lesson is not lost on the young man, and Tohm follows Vader’s lead, finding strength—and darkness—he never knew he possessed. He is well on his way to becoming the kind of officer for which the Empire will become known. But the biggest test still lies ahead—retaking the Imperial Palace from the insurgents. Today a fight . . . tomorrow a war!