The Last of the Jedi 2: Dark Warning 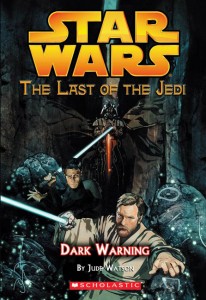 Obi-Wan Kenobi is on a mission. Along with the former Jedi apprentice Ferus Olin and a headstrong kid named Trever, he is trying to keep the Jedi’s most important secret safe from the inquisitive Empire. With Boba Fett on their trail and time running out, Obi-Wan, Ferus, and Trever must make some daring and desperate escapes…into even more danger.

Along the way, they discover some incredible news: Obi-Wan and Yoda are not the only Jedi to have survived the Emperor’s annihilation of the Order. There is at least one other…and he is hiding in the Caves of Ilum, a place where nightmares become reality and dark warnings tell of conflicts yet to come.