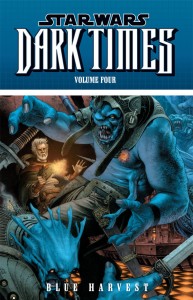 Three months after the events in Revenge of the Sith . . .

In a time when all Jedi are fugitives, surviving Jedi Dass Jennir is trying to live as an outlaw without actually becoming one. Accepting a job from a mysterious beauty, Jennir sets out to rid her town of a gang of slave runners. But when he finds that his employer hasn’t been completely honest with him, he begins to doubt the course she’s set him on. Outlaw or not, there’s one thing he knows for certain: he has vowed to save this town-and a Jedi never gives up!

Meanwhile, Darth Vader makes a discovery that has him questioning his own future and the plans of Emperor Palpatine. There are many questions and few answers in these dark times!