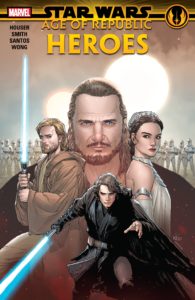 This is the Age of Star Wars – an epic series of adventures that unite your favorite characters from all three trilogies! Join the greatest heroes of the waning days of the Old Republic. Witness the never-before-seen moments that define them, the incredible battles that shaped them – and their eternal conflict between light and darkness! Considered one of the greatest Jedi Knights – or the one who led them to their doom – maverick Qui-Gon Jinn is known to bend the rules, and it’s gotten him into plenty of trouble with the Council. Now, in the face of a mission gone awry, he’s forced to confront his conflicting beliefs. Plus, Anakin Skywalker! Obi-Wan Kenobi! Padme Amidala! And Master Yoda!