A New Hope – The Special Edition #1 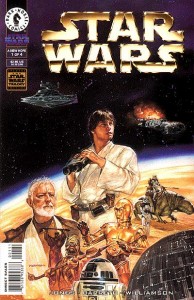 So special is this Special Edition motion picture that Dark Horse is releasing it simultaneously as a four-issue, monthly comics series and as a single-volume, trade paperback collection. The covers of the four-issue series are each painted by Dave Dorman, and, when placed beside one another, they form one massive Star Wars image with the Death Star at the center. Experience it again, for the very first time.