Jedi Quest 1: The Way of the Apprentice 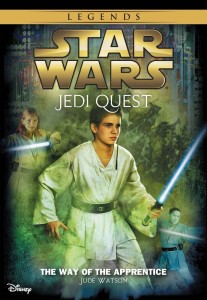 This first volume in the Jedi Quest series begins an adventure that takes place between Episode I: The Phantom Menace and Episode II: Attack of the Clones. Strong in the ways of the Force, fourteen-year-old Anakin Skywalker is an ideal Jedi apprentice. But despite his legendary piloting and lightsaber skills, he has much to learn from Jedi Master Obi-Wan Kenobi. When Obi-Wan and Anakin are separated during a mission, Anakin and the other apprentices—including his rival—must work together to survive.