The Rise of Skywalker: The Galactic Guide 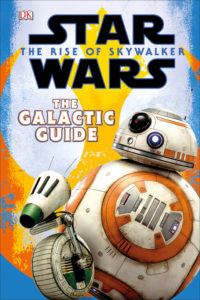 Save the galaxy from the dark side!

Packed with facts from Star Wars: The Rise of Skywalker, this book is perfect for young kids who want to join their heroes – Rey, Poe, and Finn – on their thrilling adventures in the galaxy far, far away….

Discover more about the latest Resistance recruits, including historian Beaumont Kin and a cute droid named D-O. Find out how Rey has been training to become a stronger Jedi and what the heroes have been up to since The Last Jedi.

Try to escape Supreme Leader Kylo Ren and his fearsome followers – the Knights of Ren. Marvel at the First Order’s latest vehicles, including the TIE whisper and the treadspeeder. Uncover the secrets of the Sith troopers and learn more about their terrifying weapons.

Illustrated with action-packed images from the hit movie and accompanied by fun, easy-to-read text, Star Wars: The Rise of Skywalker: The Galactic Guide is the perfect book for younglings who are desperate to find out more about the final episode of the Skywalker saga.