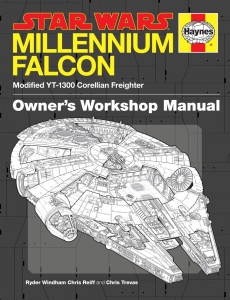 The Millennium Falcon is a legendary spaceship, made famous by its adventures under the command of smugglers Han Solo and Chewbacca, who made numerous special modifications to transform the beat-up Corellian light freighter into one of the fastest ships in the galaxy.

This Haynes Manual traces the model history of the Corellian Engineering Corporation’s YT series of spaceships and the development of the YT-1300 model line before focusing on the Millennium Falcon, itself a modified YT-1300. Onboard systems, controls, and their operation are described in detail and supported by a host of photographs, line art, floor plans, exploded diagrams, and stunning computer-generated artwork, all newly created by acknowledged Falcon experts Chris Reiff and Chris Trevas. Text is by Ryder Windham, author of more than fifty Star Wars books.

This Haynes Manual is fully authorized and approved by Lucasfilm.