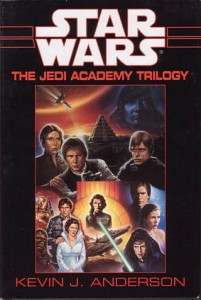 Seven years after the founding of the New Republic, Princess Leia Organa Solo is Minister of State and has borne three Jedi children — the twins, Jacen and Jaina, and baby Anakin. Han Solo is an official envoy for the new government, traveling the galaxy on diplomatic missions. And Luke has been given leave to seek out candidates for the Jedi Academy that will not only herald a renaissance of the Jedi Knights, but also provide future champions of the Force to protect the New Republic. Yet the peaceful and benign reign of the Republic is far from secure… Though the Empire was finally vanquished, remnants of the Imperial forces are scattered throughout the galaxy. Die-hard loyalists, they’re intent on waging a brutal guerrilla war against the New Republic. Among the most dangerous is Imperial Admiral Daala, who has added the ultimate weapon to her fleet of Star Destroyers. More powerful than the Death Star, the Sun Crusher, a small ship, is capable of annihilating an entire solar system by triggering its sun to supernova. To make matters worse, there are those from Han’s bad old days still anxious to avenge the past. And, as Luke will soon discover, even the most promising Jedi recruit can be unwisely tempted by the dark side of the Force… Includes Jedi Search, Dark Apprentice and Champions of the Force.