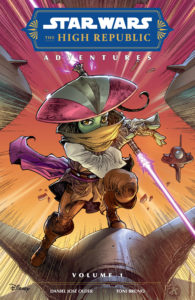 Phase II of Star Wars: The High Republic kicks off from Dark Horse with this thrilling tale of Jedi and pirates!

As a teenage Padawan, Sav has been training her entire life to understand the ways of the Force and become a Jedi Knight, until a chance encounter with pirate queen Maz Kanata and her outlaw crew finds Sav longing for greater adventures beyond her world of disciplined studies.

By chance, the news of an alliance of dark Force users forces Sav to take on a deadly mission, undercover as member of Maz’s crew to discover the true nature of this dark alliance.