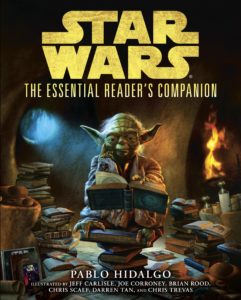 The legendary motion picture Star Wars has spawned two big-screen sequels and three prequels—and decades of bestselling fiction. From the original movie tie-in novel through the monumental Fate of the Jedi series, legions of devoted readers have helped expand science fiction’s most celebrated film saga into a page-turning print sensation. Now, for the first time, a comprehensive overview of these sweeping Star Wars adventures is presented in one beautifully illustrated volume.

Whether skimming through fateful eras from the Old Republic to the New Jedi Order; delving deep into the ancient history of the Lost Tribe of the Sith or the tumultuous Clone Wars; crossing paths—and lightsabers—with Dark Lords such as Plagueis or Bane, Sidious or Vader; helming the Millennium Falcon with Han Solo; or mastering the Force with Luke Skywalker, this one-of-a-kind, one-stop reference is a must for fans looking to maximize their knowledge of the sprawling Star Wars Expanded Universe.