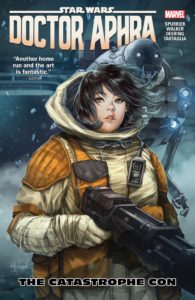 Doctor Aphra is behind bars. Again. But this time she’s in Imperial custody, strapped to an explosive transmitter synced to a single hubdroid. Take one step too far? Kablooey! Normally, sitting still wouldn’t be an issue – but what happens when Aphra’s captors send her hubdroid right into the middle of a war zone? And what’s this rumor about the prison being haunted? Meanwhile, Aphra’s got information – and it’s information that the Rebellion wants. But how far are they willing to go – and who are they willing to recruit – in order to get it? Surely even our lovable rogue archaeologist can’t fi nd a way to make things even worse, right? Wrong. Because her current flame, Inspector Tolvan, and her ex, Sana Starros, are just about to meet. Awkward.