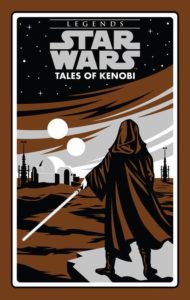 FOR THE FIRST TIME IN A SINGLE VOLUME—TWO THRILLING NOVELS FROM THE STAR WARS EXPANDED UNIVERSE, FEATURING A YOUNG OBI-WAN KENOBI

Kenobi—John Jackson Miller
Tatooine, the harsh desert planet on the edge of civilized space, is an unlikely place to find a Jedi Master in hiding. Known to locals only as “Ben,” the bearded and robed offworlder shares nothing of his past and goes through great pains to remain an outsider. But when violence erupts between some of Tatooine’s farmers and a tribe of marauding Tusken Raiders, Ben finds himself drawn into the conflict. It’s a move that may reveal him as Obi-Wan Kenobi, hero of the Clone Wars and an enemy of the Empire—and endanger his true mission as protector of the galaxy’s last hope.

The Approaching Storm—Alan Dean Foster
The Republic is decaying and forces of discontent are threatening the collapse of the galaxy. At the request of the Supreme Chancellor Palpatine the Jedi Council sends two Jedi Knights, Obi-Wan Kenobi and Luminara Unduli, along with their Padawans Anakin Skywalker and Barriss Offee, to quell the growing secessionist movement on the planet Ansion. To succeed, the Jedi will have to fulfill near-impossible tasks, stalked all the while by an enemy sworn to see the negotiations unravel and the mission fail.