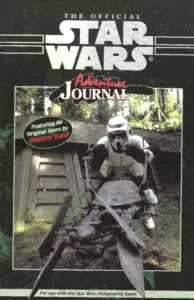 Join New York Times best-selling author Timothy Zahn on a journey into his most notorious villain’s past. Admiral Thrawn has fallen afoul of Imperial Court politics. Exiled to explore and patrol the Unknown Regions, he and the crew of the Star Destroyer Admonitor encounter a piratical band of aliens known as the Ebruchi. Using his cool cunning, tactical genius and clever deceit, Thrawn carefully probes the Ebruchi, seeking to discover their weaknesses, strengths, and true motives. Although his longtime friend Captain Parck displays a loyal confidence in his commander. Thrawn’s other officers are not so certain. They see the Admiral’s actions as endangering their skilled soldiers, limited resources, and technological superiority. If Thrawn can rout the Ebruchi pirates and face down mutinous officers on his own Star Destroyer, his will be a daring „Command Decision.“