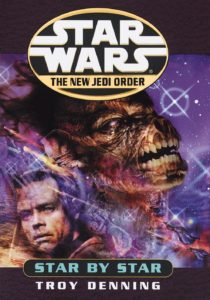 The New York Times bestselling Star Wars series The New Jedi Order enthralls readers with its epic drama and thrilling adventure. Now readers will pierce the very heart of darkness, as those fascinating figures in that galaxy far, far away–Han Solo, Luke Skywalker, Leia Organa Solo, as well as their children–spring to vivid life to battle their deadliest adversaries.

It is a solemn time for the New Republic, as the merciless Yuuzhan Vong continue their ruthless campaign of terror and destruction. The brutal enemy has unleashed a savage creature capable of finding–and killing–Jedi Knights. And now Leia Organa Solo faces a terrible ultimatum from the mighty alien foe determined to conquer the galaxy. If the location of the secret Jedi base is not revealed within one week, the Yuuzhan Vong will blast millions of refugee ships into oblivion.

As the battered but still unbroken Jedi scramble to deal with the newest onslaught, Leia’s son Anakin lays out a daring plan. A Jedi strike force will allow itself to be „captured“ by the Yuuzhan Vong and taken to their stronghold in the realm of darkness, where the Jedi will sabotage the evil empire’s deadliest weapons. The leaders of the force are the three Solo siblings. The risks are tremendous. Can the Jedi fight a ruthless enemy without becoming ruthless themselves and falling victim to the dark side?