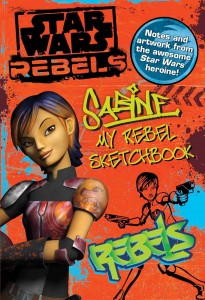 She’s funny, creative and impulsive; an artist with spray paint and advanced weapons. She’s also a 16-year-old girl who happens to be flying around the universe, wreaking havoc on the Imperial army. Now you can read the private diary of Sabine Wren, the awesome new heroine of the Star Wars Rebels television series!

Wren is one of the most compelling and interesting female character in Star Wars since Princess Leia! She’s an explosives expert supreme, and a master of advanced weapons. She’s also a crazy artist, gifted at graffiti and sketching. She’s strong, bold, confident, cool – and only 16! Get to know Sabine through her own words and artistic expression in this replica journal filled with sketches, photos of her best work, stories, doodles and her observations of her fellow rebels. In Sabine’s own writing, relive events that occur during the first 10 episodes of Star Wars Rebels, plus discover details about Sabine’s life and the rebel team.