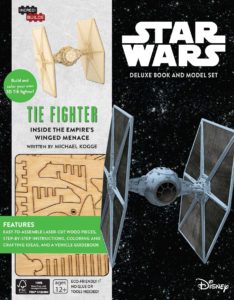 Build and color your own 3D TIE Fighter model and learn all about the classic Star Wars spacecraft in this deluxe IncrediBuilds book set.

This exciting Star Wars book and wooden model bring to life one of the Galactic Empire’s deadliest weapons: the TIE Fighter. The full-color, hardcover book includes everything you need to know about the TIE Fighter, from basic flight and weapons capabilities to pilot training, notable battles, and the wide variety of TIE Fighter models, such as the TIE Interceptor and TIE Bomber. The wooden model is easy to assemble and snaps together to form a dynamic, displayable 3D version of this fan-favorite Star Wars spacecraft.