Heir to the Empire #6 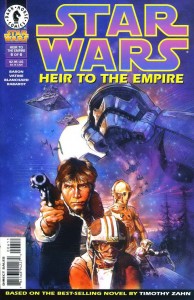 Luke Skywalker has been bereft of the Force for some time now, and has had to rely on his wits and cunning to stay out of the hands of the Imperials. Now, disguised as a bounty hunter with the beautiful and lethal Mara Jade as his prisoner, he has to find Captain Talon Karrde, rescue Han from the Empire’s clutches, and reunite with the other architects of the Rebellion. But even if Luke and Han prevail, the Rebellion may be on the verge of destruction, unraveling itself in a bloody civil war!